This is the first in a series of eight posts breaking down each of the Black Keys albums leading up to the release of Turn Blue on May 13. These posts will give a small amount of background on each album, but will mainly detail my feelings about them and what I believe makes each one unique.

I’ve written a bit in the past about how I discovered the Black Keys and what their music has meant to me. They have finally announced a release date for their upcoming album Turn Blue, the follow up to their most successful album to date, El Camino (2011). The Black Keys are a great example of a band that has become successful in their own way, without comprising what made them great from the beginning. In fact, it took them six albums, and eight years to have a platinum selling record  (2010’s Brothers). Obviously, most bands will never have a platinum record so no one is feeling sorry that it only took them eight years. But their success shouldn’t have surprised anyone who had been listening to them for years. Really, most Black Keys fans like me were probably shocked it took the general public this long to start paying attention.

If you want to learn more about the Black Keys or any of their albums, check out the thousands of other, more informed articles and blogs about them (after you read mine, of course). 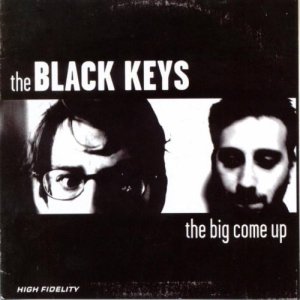 The Big Come Up is a loud, rough, statement of intent from two kids from Akron, Ohio. And that intent is to play some rock and roll the way it is supposed to be played. It’s a fuzzy ode to blues rock that sounds like it was recorded in someone’s basement straight onto an 8-track. And that’s exactly how it was made.

Full of covers of blues songs by R.L. Burnside, Junior Kimbrough, and traditional songs as well as some original material with words Auerbach made up on the spot, the albums lyrics won’t drive you to introspection. But the blues guitar and Auerbach’s vocals will make you wonder how this album was made in 2002 and not 1972. I don’t think its a real musical term, but a lot of Black Keys albums could be described as sweaty and this one is no exception. You feel like you are in the basement with these kids, banging away on the drums and ripping off blues riff after blues riff.

Strangely enough, Dan Auerbach never sounds older and gruffer than he does on this album. He sounds like a man who has been smoking for 50 years. It took him years to get to where he could consistently use that bluesy falsetto that he employs to great effect these days. A 23 year old Auerbach probably never even considered singing falsetto. If they made this album now, they would be called lazy and uninspired. But for where they were in their lives and careers, they could not have made a more perfect album. It’s the album every kid who has ever picked up a guitar and started a band wants to make.

None of these songs are longer than 3:50 (except the 23:00 “240 Years Before Your Time”) and again the lyrics mean almost nothing. But the album itself is a statement. A declaration that there are still people playing rock and roll. To understand the context of this album, think back to 2002. Nickelback’s Silver Side Up was the top selling rock album of the year. The Big Come Up is proof that you don’t need much to make quality rock and roll. You don’t need slick producing, or deep lyrics, or even a record deal. All you need is a guitar, a drum set, a basement and desire.

If I had to pick a favorite, it would be “I’ll Be Your Man”, but all of the songs on the album are just about the same level of awesome.