This is the sixth in a series of eight posts breaking down each of the Black Keys albums leading up to the release of Turn Blue on May 13.

This album was The Black Keys first foray into the mainstream. It debuted at number 14 on the Billboard charts and was ranked by Rolling Stone as one of the Top 100 albums of the 2000s. So, why do I consider it The Black Keys weakest effort? We’ll get into that below. 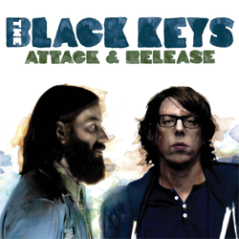 Auerbach and Carney wanted to change things up for this release, and for good reason. As I talked about with Magic Potion, their self-made aesthetic had grown a bit stale. To remedy this, they brought in Danger Mouse, the other half of Gnarls Barkley, to produce. They also recorded in a proper recording studio for the first time. The result is a well rounded album full of songs that, while good, do not sound like The Black Keys. Auerbach’s voice is still recognizable, and there are songs that do sound like the Black Keys, but Attack & Release sounds more like a Danger Mouse album featuring The Black Keys.

From the first note, you know this one is different. The first song “All You Ever Wanted” sends a clear message that this is not The Black Keys of old. A slow, echoey tune that builds to a squealing rock organ-filled climax. It’s not a bad song, but it’s certainly not The Black Keys banging away in their basement either. Surprisingly though, the very next song, “I Got Mine” takes you right back to what the guys do best. It’s loud, bluesy, and rocking. It fits right in with any of best efforts put forth by The Black Keys.

Again, Attack & Release isn’t a bad album by any means. It’s just different. There are some good songs, “Psychotic Girl” uses a banjo to good effect, and “Oceans & Streams” is a good one too. The rest seem like good ideas that maybe weren’t executed to their full potential.

But, Attack & Release was another very important step in their career. It showed that they were willing to change to be successful, but it also showed that they needed to stay a little more true to themselves. After Attack & Release, the duo would do some soul searching. They would both release albums apart from The Black Keys. They would collaborate on an excellent rap album Blackroc, which features Auerbach and Carney creating the tracks and singing back up for a host of rappers including Mos Def and RZA. And Carney would get divorced.

All of this would lead to their smash hit, world beating, and essentially perfect album Brothers. Next week, I’ll detail exactly why Brothers may be just be a perfect album.

Gotta go with “I Got Mine”.