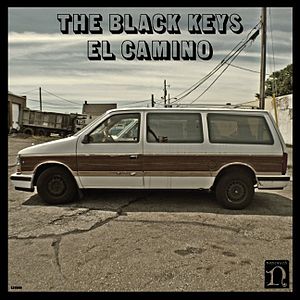 This is the eighth in a series of eight posts breaking down each of the Black Keys albums leading up to the release of Turn Blue on May 13.

Honestly, if you’ve read any of these posts, you have probably already listened to El Camino. It’s the Black Keys biggest seller, it vaulted them on an arena-filling tour with the Arctic Monkeys and generally made them the type of rock superstars that are increasingly rare these days. And it did all of that for one simple reason, it’s great.

For El Camino, the Black Keys went back to their roots while pushing their music in a new direction. Gone is the blues, replaced with blistering rock and roll. Auerbach and Carney have said in a number of interviews that they were even surprised by the speed of some of the songs on the album.

While Brothers was a complicated, deep, and in many ways beautiful record, El Camino is simple, surface-level, and fun. That’s not to take anything away from El Camino, that is exactly what they were trying to accomplish. In fact, most of the lyrics on the album were improvised at the microphone or written with almost no depth from Auerbach.

But that’s what makes this album so accessible, it’s the Black Keys at their most mainstream. But, at the same time, they didn’t sell out for the fame. These are still uniquely Black Keys-like songs. The first single, “Lonely Boy”, with it’s singalong chorus and it’s driving guitar and bouncy organ lends itself perfectly to a party. The best song on the album is “Little Black Submarines”, which Auerbach starts by playing on a resonator guitar before switching to a fuzzy electric for the rocking final two minutes. It’s here where their talents truly shine: Auerbach shredding the guitar and Carney pounding away furiously at the drums. Despite all the nuance that Carney has picked up in the years that he’s been drumming, he never seems more comfortable than when he is pounding away at his kit like in the old days.

There’s not much more I can write about this album that hasn’t already been written. It’s pales in comparison to the significance and perfection of Brothers, but it’s still great and fun. If it’s your intro to the Black Keys, it’s a great intro and if you’ve been a fan for a long time it’s a natural progression and exactly what you expected.

This concludes my long series on the Black Keys. Thank you for reading, let me know your thoughts in the comments or in person. The newest album Turn Blue comes out in a few hours, and from listening to a stream, it’s very different than the rest. But once again, it’s just a natural progression for two guys who just keep moving forward and setting the bar higher and higher.

Definitely the best song on the album and one of their best songs ever, unfortunately Spotify only has the shorter, radio-edit version.