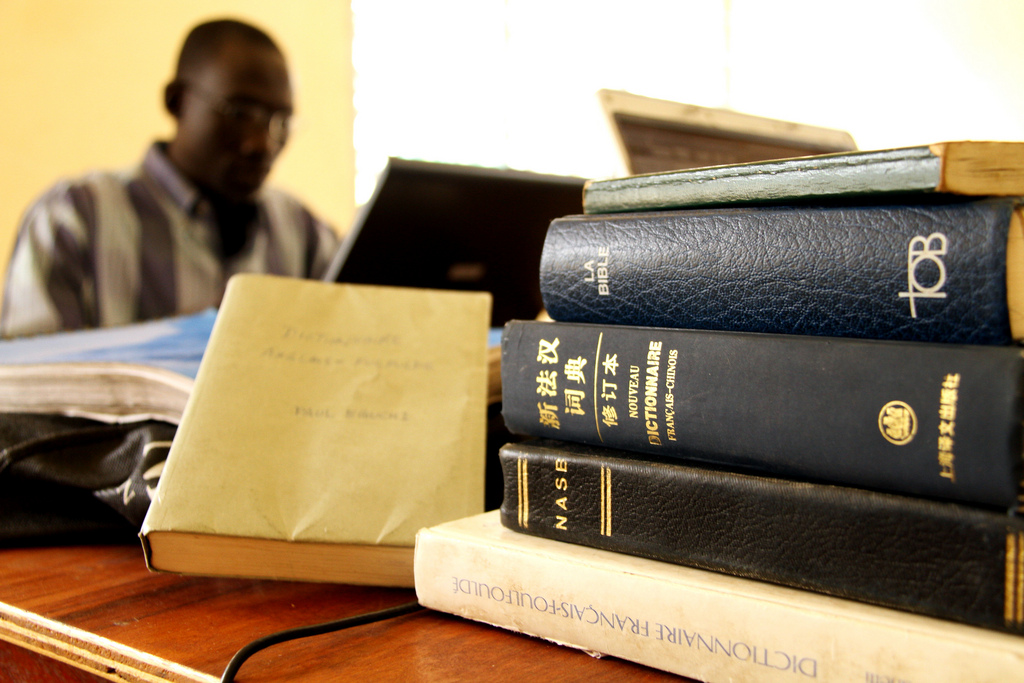 Last week at church my wife and I were praying through the prayer outline we were given (it was a different, but neat service) when I noticed something going on around me. The family on my left was praying in what I can only guess was Tamil, while the people to my wife’s right were praying in Spanish. My wife and I were the only people in our immediate vicinity speaking English.

Our church is in the middle of Dallas, Tx. An outsider would probably refer to it as a middle class white church. That would be completely wrong. As I spoke to the family next to me, I learned that they were from India and had been attending an Indian Pentecostal church in the area, but their kids’ friends had told them about Watermark (my church) and the family decided to check it out. I didn’t get the story of the Spanish speakers to our right, however I did notice that they didn’t know each other previously and met at church only to find out that they both were native Spanish-speakers.

This is far from an isolated incident in Dallas. I can’t speak for other cities in America, but I don’t think it’s an event isolated to Dallas either. I can recall numerous times in the last few months in which I was in a situation where I was the only native English speaker. Sometimes it’s at places in which I know it will happen, such as a tortas place. Other times it’s when I walk to the field that’s part of my apartment complex and realize that besides my friends and I, there are large groups of Indian or Pakistani people playing cricket and Arab-speakers playing volleyball.

The world, whether we like it or not, is arriving on our doorstep every single day. Some, presumably those mysterious people supporting Donald Trump in the polls, would decry this as some kind of issue. But as Christians, we need to realize the unbelievably great opportunity we have just outside our door. Previously to share the Gospel with people from India, Egypt, Guatemala, China, or anywhere else we had to secure support and funding from a church, spend years learning the language and culture of an area, and risk arrest or death in a foreign country hostile to the Gospel.

Now we just have to join in a random volleyball game or talk to the parents of our kids’ friends at school. It’s an unprecedented and unmissable opportunity. You may not like the state of the US at the moment. Maybe it’s more hostile to the Gospel than in the past, but it’s still the most free nation on earth. We are 100% free to invite others to church without fear of legal repercussions. We are free to share the Gospel with anyone at any time. Many immigrants come from nations where this isn’t the case.

So how do we respond to this incredible opportunity? I’ve got a few steps that I think will help, but I must admit that I don’t do most of these myself. These are challenges not only to whoever reads this, but to myself more than anyone.

English isn’t the language of the Gospel. Yes, it’s the language we speak here in America, but without the gargantuan and sacrificial work of those who lost their lives just to give us an English Bible, we would still be required to learn Latin just to read it. Do everything you can possibly do to make the Gospel available to everyone, even if that means learning a foreign language without the help of your high school Spanish teacher. Knowing another language makes interacting with people around you less intimidating. I speak conversational Spanish, therefore I have no qualms going into a place in which Spanish is the most spoken language. But I admit that I know more slang and curse words than I do words that would help spread the Gospel. That’s what I’ll be focusing on in the coming weeks and months: Learning how to spread the Gospel in Spanish.

I will also be working on some conversational Arabic as I’ve encountered numerous Muslims in my neighborhood and I’d like to be able to say more than hello. I know I’m years and years away from actually having full conversations in Arabic, but I’d like to at least show people that I’m trying.

I truly think all believers need to at least be able to communicate in more than one language, be it sign language, Spanish, or any other language that people around them speak.

Interact With Those Around You

Find out people’s stories. Find out where they came from, what their situation is, why they moved to America. See if there is anything you can do to make their transition to America easier. I’m a journalist, it’s natural for me to ask people questions and learn their stories. I do it all the time, but often what I don’t do is offer help. I don’t often invite people to church. I don’t often share enough of my own story of God’s grace.

The impact of sharing the Gospel with someone from another country could have massive implications. Imagine that they believe and in their joy reach out to family members back home. You now have a mission field in a country you’ve never been to. It’s an impact that may never be fully understood until we reach Heaven.

Again, this isn’t something I pray for often. I don’t pray that I will run into someone from a foreign country during my day-to-day life. I don’t ask that I will have the words to say to someone. But I should and I’m committing to doing that in the future.

Like I said, you can be upset that people are moving to most free country in the world. You can be mad that they are inconveniencing you in some way. That’s fine, we are free to be mad about that. I mean, it’s fine if you aren’t a Believer. It’s fine if you don’t think that we are here on Earth to share the Gospel with the entire world.

Oh sorry, that’s Greek. I don’t speak Greek. Fortunately, faithful servants of Christ have translated the Bible into English: “But you are a chosen race, a royal priesthood, a holy nation, a people for God’s own possession, so that you may proclaim the excellencies of Him who has called you out of darkness into His marvelous light; for you once were not a people, but now you are the people of God; you had not received mercy, but now you have received mercy. Beloved, I urge you as aliens and strangers to abstain from fleshly lusts which wage war against the soul.” – 1 Peter 2:9-11.

We are all aliens and strangers in countries that are not our own because our citizenship is in Heaven. Let us commit to increasing the the citizenship of our true home by talking with the people moving to our temporary home.

2 thoughts on “Every Christian Should Learn A Foreign Language”