My new book Lesson from Legends: 12 Hall of Fame Coaches on Life, Leadership, and Leaving a Legacy is available on Amazon right now. The book is great, not because I wrote it, but because it contains wisdom from so many great men.

It obviously has some great advice for coaches and players, but I am neither a football player nor a coach. Yet, I am a better person for having spent time with each of these remarkable men. Here’s a collection of six of the best pieces of advice from the book. To get more wisdom from each of these men, plus the six other coaches featured (including Steve Spurrier), you can get the book on Amazon or Barnes & Noble.

Barry Alvarez – Focus on the job you have.

Don’t worry about your next job. Do as good a job as you can where you are. Others will notice.

Coach Alvarez talked at length about some of the problems he sees in coaches these days, and one of them was their constant desire to get that next job. They seem to always be looking for a promotion and forget to focus on their current job. But this problem doesn’t exist only in the coaching profession. It’s an issue in any job.

Focusing on the job in front of you and doing the best you can will get you further in life than looking elsewhere. In coaching, people will offer you a bigger job if you are doing a great job at your current one, not if you’re unfocused and looking for another job. It’s the same in life. Barry Alvarez’s track record speaks for itself and this short, yet powerful, quote sums up his strong feelings on the topic.

“We tried to be positive. I felt that the best way to change behavior was to catch somebody doing something right and reinforce that. We never wanted players to be humiliated or made fun of for something personal. Certainly you had to correct players, but we did it in the right way. Above all, the players knew we cared about them as people.”

All of the men I spoke with were remarkable in their own way, but Coach Osborne quiet, confident, humility really struck me as we spoke. Here is one of the most successful coaches in college football history, yet he didn’t seem to have an ounce of arrogance about his accomplishments.

His consistent winning at Nebraska is unmatched in the history of college football. His steady, positive personality is one of the big reasons for this success. Coach Osborne knew that people don’t change their behaviors when they are dressed down, insulted, and negatively reinforced. Instead, he made sure to reinforce positive habits. 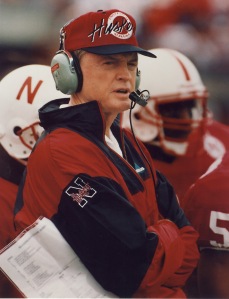 Barry Switzer – Give credit to others.

“I had players who believed in me and believed in how we treated them. They sold me and the program to others. Players will tell recruits the truth. Your players have more to do with selling the program than any coach.”

Oh man, I love Barry Switzer. Of course, some of it is my bias as a Sooner alum. But, really, it’s because of his larger-than-life personality. Barry Switzer is a non-stop force of nature.

I’ve had several interactions with him in the last few years and every single one comes with multiple hilarious stories. There’s the time he was receiving so many visitors on a game day that he didn’t have time to button his shirt, the time he gave my wife and I a tour to meet all 6 of his dogs, the time he made me get on his computer and log in to his bank account for him, an many many more.

But this particular interview was interrupted midway through by him saying, “There’s some kid at my door…he’s fixing to ring this door bell..yep there he goes and there go the dogs. Let me take care of this, you call me back.”

Uh…I call you back? How long do I wait? Five minutes? Ten minutes? An hour?

I settled on five minutes and gave him a call back. When I asked if he’d taken care of it he said something about how the guy was still standing there but he was good to talk. And we continued our interview.

Switzer is famous for his swagger, his arrogance, his “Beat Texas” hat, and his domination. But one thing you realize when you actually get to know him, is that he gives every single ounce of credit to his players and assistants. He will talk all about how they “hung half a hundred” on some team in the 70s, but when he talks that way, he’s giving full credit to others. He strove to treat everyone right, to make Oklahoma the place to be, and to recruit every great player he could.

But he fully acknowledges that he would have had no success if his current and former players didn’t speak well of him. Reputation is incredibly important. Coach Switzer’s reputation is a lot of things, but all one has to do is hang around his house on game day to see what he meant to his players. They stop by all day long, bringing their kids and grandkids to meet the man that meant so much to their lives. And Switzer receives every one of them with open arms (and sometimes an open shirt), because he recognizes how important they were to his life and success as well. 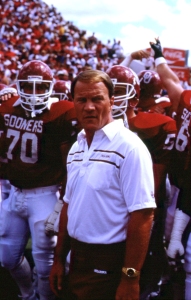 Fisher DeBerry – Learn from the best.

When I became a Head Coach, the first person I called was Bobby Bowden and I said, “What the heck do I do?” He said, “Why don’t you just come down here?”

Fisher DeBerry may not be a household name despite being a widely respected man throughout college football. The number one reason for his reputation is the success he was able to have at Air Force.

In modern college football, winning at a service academy is extremely difficult, but DeBerry was able to do it at Air Force for 23 seasons. In 1985 his Falcons went 12-1 and beat Texas in the Bluebonnet Bowl.

Like Switzer, and so many other coaches, DeBerry doesn’t take much credit for his accomplisments. He always wants to acknowledge the people who helped him. And he says when he first got the head coaching gig at Air Force, the first person he called was the legendary Bobby Bowden. Bowden invited him down to Florida and he stayed with Bowden for a few days. Then DeBerry called former Baylor coach Grant Teaff, and Teaff did the same thing as Bowden. DeBerry knew that he needed to learn from the best. He had the humility and the desire to improve that is so necessary in any walk of life.

Coach DeBerry was so gracious with his time when we spoke. He talked to me like he had known me for years. He was telling me all about his recent move, how he was near his grandson who is currently in college, the movie he was going to see that afternoon with his grandson, and whatever else was on his mind. We talked for an hour, and I think he would have kept going if he didn’t have to go to that movie. Another reason Coach DeBerry is so respected throughout college football is the incredible graciousness with which he carried himself. There’s also a lesson to be learned from that. People will be much more willing to help you out if you have a reputation as a gracious, respectful and kind person.

Phillip Fulmer – Control what you can.

You have to control everything you can, and you manage the things you don’t have control of.

All these years later, many people may not realize that those two things did not go together. Fulmer won the BCS National Championship the year after Peyton Manning graduated. Manning’s teams were great, but they were never able to get over the hump and win the title.

But the year after, led by QB Tee Martin and a great Volunteers defense, Fulmer’s team went undefeated. When I talked to Coach Fulmer about that season and about the differences between the championship season and the others he brought up several specific plays that went their ways in big games. He also talked about plays that didn’t go their way in the previous seasons that cost them games.

So I asked him what made the difference in the title-winning season as opposed to the others and how you can prepare for those big swing plays and he said the quote above. It’s a simple idea, but hard to execute.

He basically said that you can’t prepare for those moments . You have no idea which way an oblong football is going to bounce when it’s fumbled. If it goes into your teams’ arms, then you might win. And if it doesn’t, you could lose. You can’t prepare for that. But you can be prepared for the things you can control. You can work hard to get in shape so in the fourth quarter when a big fumble happens you have more in the tank and can run just a little faster to the ball. Sure, it still might bounce the other way, but you did what you could do to control the situation. So if it goes your way, great. And if it doesn’t, you know you did as much as you possibly could to be successful.

When we spoke, Coach Fulmer was far from becoming the next Athletic Director at Tennessee. Now, he’s taken on that role and has a lot of work in front of him. I suspect he’s still leaning on this principle in his new job. 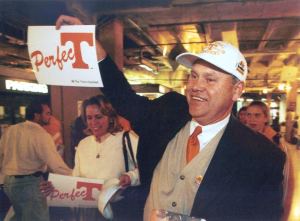 R.C. Slocum – The way you do things matters.

I have to give Coach Slocum quite a bit of credit, he was the first coach to take a chance on me and do an interview for this book. He was very passionate about the topic and really helped to set the template for the rest of my interviews. I’ll be eternally grateful to him for that.

Coach Slocum was an incredibly successful coach at Texas A&M in the 1990s, leading them to four conference championships. He’s the winningest coach in Aggie football history.

But more important than those wins was the way his team won. When he took over the Texas A&M program, they were coming off some NCAA sanctions. Coach Slocum was expected to win games and run a clean program, something many would say is impossible in college football. But for the better part of a decade, Coach Slocum did just that.

He’s passionate about doing things the right way. Even though that can sound cliché or lame, it’s extremely important. If you win as a coach, but cut corners while doing it, there’s a good chance you will be caught and those wins will be taken off of your record. Then your legacy is one where people have to say things like, “Well, technically he didn’t win that national championship because it was vacated.”

But if you did things the right way when you were the coach, no one has to hesitate when talking about your records and your legacy. The same is true in business, in life, and in relationships. If you cut corners early in your career, when it’s time to be the boss you will still be that same guy who cuts corners and it will come back to haunt you. It’s important to have a sense of values and stick to those values in everything. 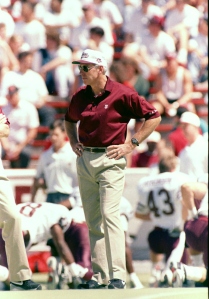