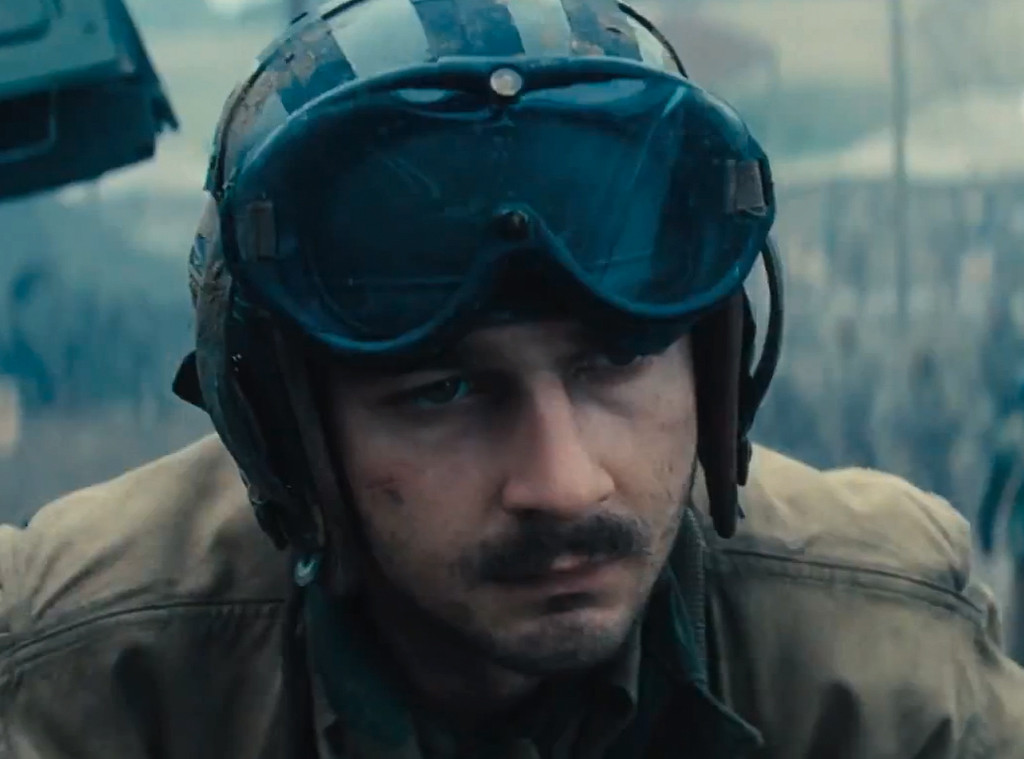 War is hell and Fury is hell to watch.

And that’s why it’s perfect.

In no way is Fury fun to watch, it’s not entertaining, it’s not inspiring, it’s not uplifting. Even the interlude in the middle of the film that’s meant to bring an air of civility is wrought with tension and a knowledge of impending doom.

Again, that’s why Fury is the perfect war movie.

Fury has been described as an anti-war film and it is. It’s an anti-war film because it’s a film about humanity. War is directly opposed to humanity because at it’s very core it’s about the elimination of other humans. It’s about snuffing out the life of someone else before they snuff out yours.

That’s not to say director David Ayer is a pacifist. World War II is the easiest war to portray good vs evil because the argument for the Allies and the argument against the Nazi’s is so straightforward. But the individual heroes in Fury are not the straightforward type. While the overall narrative of WWII was good vs evil, to leave it at that discounts the fact that the armies on both sides featured human beings capable of extraordinary courage, cowardice, selflessness, and brutality.

Here are some themes and motifs that I noticed throughout the film that I found to be important.

The film opens on a lone horse ambling slowly in an empty field. It’s fascinating that Ayer chose to open his film about a tank by lingering on a horse. A war movie involving tanks is one set firmly in the 20th century or later. A war movie involving horses stretches as far back as time. Men have ridden horses in battle from the time they mastered riding them. Technology changes and improves, but the nature of war doesn’t change.*

Every advancement in war, theoretically, gives men the ability to kill more people while risking themselves a little less.

Vehicles improve, weapons improve, armor improves, but at some point war will always come down to one man against another man. That becomes abundantly clear when the peaceful, pastoral scene comes to a violent and abrupt halt as Brad Pitt’s Don leaps from his tank onto the Nazi soldier riding the horse and stabs him repeatedly. The scene is violent and brutal and is a clear warning that Ayer will not be pulling punches in the film.

Horses are also used later in the film as the tank crew recounts one of their worst memories. After the invasion of Normandy, the Allies came upon a large group of retreating German soldiers and slaughtered them in battle. The tank crew recounts the three straight days they then spent shooting injured horses to put them out of their misery.

It’s a pivotal moment in the story and one that, if you didn’t already realize it by this point in the film, all but confirms that these men will not survive the war. Their innocence has totally been lost. Events like these are so seared into their memory that they will never be able to function as normal members of society. They were meant to die in their tank. There is no normal world left for them. The only one still able to be saved is the new member (and audience surrogate) Norman, which is why some members of the crew resent him so much and why Don looks out for him. Don knows that he and his men are beyond salvation, but maybe Norman can still be saved. 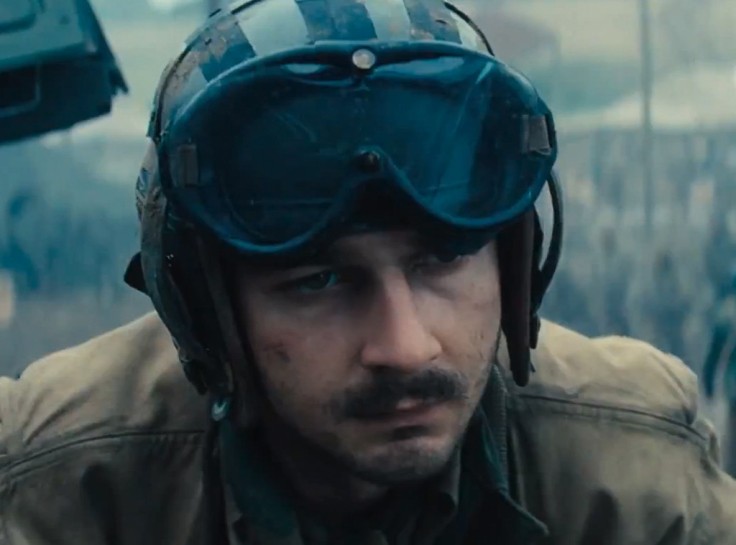 Fury features a number of very good acting performances. Brad Pitt is predictably great, as is Logan Lerman, who plays Norman. The other members of the tank crew are solid, but a little one-dimensional. Shia LaBeouf, however, turns in a career-altering performance as “Bible”, a devout Christian. His character is one of the most three-dimensional characters in the film and one of the most three dimensional depictions of a Christian in any film I’ve seen. Bible quotes scripture often, prays over dying soldiers, and argues with his crew members about the nature of salvation and God’s will. But he also cusses with the rest of them and, of course, kills in battle. He’s not perfect, but he is sincere. LaBeouf, who claims that he personally found salvation during this film, avoids playing Bible in a ham-handed or cliche way, giving the character a depth that makes him seem real. It’s a much deeper picture of a Christian than you will find in many “Christian” films.

Bible’s influence appears to be totally lost on his tank crew as they carouse, curse, drink, fight, and generally do everything that Bible advises against. But the end of the movie shows that the influence isn’t totally lost. When Don is shot, Bible begins to patch him up while quoting scripture. Don finishes the scripture and gives the reference. It’s not clear where Don knows the scripture from, but one assumes it’s because Bible has been quoting it for the last four years of their lives. It’s a powerful moment that shows that we can have influence on people whether we realize it or not. 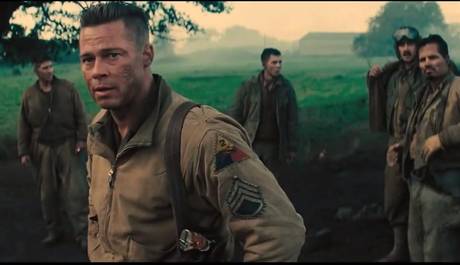 It’s easy to compare Fury to Inglourious Basterds because of the WWII setting and the main character being played by Brad Pitt. It’s also easy because both main characters played by Pitt have a band of fiercely loyal fighters who follow him despite his moral ambiguity. But, Pitt’s Don in Fury is really nothing like the oafish, jocular, brutal hick Aldo Raine. While Raine’s entire goal is the brutal and sadistic murder of the Nazis, Don’s (or “Wardaddy” as he is nicknamed) motivations are less clear. It’s obvious that he is fighting for what he thinks is a right cause, but at some point in the years of fighting he lost his sense of humanity towards Nazi’s and especially the SS. He physically forces Norman to kill a Nazi who has surrendered in order for Norman to draw his first blood. This act would constitute a war crime. But Wardaddy isn’t totally evil either, as the interlude scene featuring his tender treatment of two German women shows. He’s a man trapped between two worlds. The world of war, the only one he has known for the last four years and the one he knows he will die in, and the world he left, one of civility and love.

The only glimpse into Don’s motivation comes when he takes Norman into a room full of leaders of the Nazi party of the town they have conquered. All of the leaders committed suicide instead of being captured. Don’s point in showing it to Norman is to reiterate that the men they were fighting were deeply evil. Not only had they overseen the hanging of those who refused to fight for the Nazi party, including women and children, but they were too cowardly to face their own death at the hands of the Allies.

We know almost nothing about any of the characters back stories, especially the members of Wardaddy’s tank crew before the introduction of Norman. I think that was a purposeful decision by Ayer. Their lives are in that tank. Their brothers are the men in the crew. The home is the tank and their tomb is the tank.

I’ve discussed in the past my idea of art that is perfect. I used No Country for Old Men as an example of a perfect film. Judging art is an inherently subjective thing, but there are some criteria that I run things through when I’m passing judgement: Did it accomplish what it set out to accomplish? Does it show extraordinary talent? Does it challenge you and leave you a different person than you were before you engaged with it? Will it hold up in its own era and future eras as good art?

I believe Fury meets those criteria (don’t know yet about the last one) in the same way that Saving Private Ryan did over 15 years ago. I think each decade needs a film like these two to remind us of the price paid by our forefathers. We need more (accurate) historical films in general, but being reminded of what our grandfathers and great-grandfathers went through so that the world could be a more peaceful place is important. Fury is a film that makes abundantly clear why most people in the Greatest Generation refused to talk about their service. The things they experienced were too much to have to describe to people who couldn’t possibly understand.

The final few shots of the movie are ones that will stick with me for a while. When Norman is rescued, he is whisked away into an ambulance as a guy quickly tells him that he is a hero. It’s the only clue we get as an audience that their final stand served a good purpose. Instead of focusing on that, though, the camera stays on Norman’s dazed and horrified face. It’s reminiscent of the final shot of Zero Dark Thirty, another film which could have ended on a jingoistic high note, but instead ended with a shot of the main character’s face. Both films end by reminding us of the toll war exacts on people, especially those who survive.

*For example, our general idea of a Native American is a warrior astride on a horse, riding swiftly into battle. We often forget that horses are not native to this continent. The horse was a massive improvement in transportation for the Native Americans. Until this point they walked everywhere. The Sioux Indians were among the most adept at riding their ponies. They were also one of the most feared and brutal tribes on the continent. Before the horses reached their tribe in the northern plains of the North America, the Sioux were a far less significant or well-known people. The horse enabled them to use their natural warlike attitudes and brutality to dominate other tribes and even defeat the United States Army in a war. Did the horse make them brutal and merciless enough to rule the plains? Of course not, it just gave them the ability to traverse larger territory and spread their brutality further.